In 1807, people on the west bank of the saw a strange boat.  It was Robert Fulton’s Steamboat, often called the Clermont.  The boat was the first vessel to prove that steam propulsion would work for commercial river traffic. According to the book Great Fortunes:

“What seemed strange in the vessel was the substitution of lofty and straight black smoke-pipes, rising from the deck, instead of . . . gracefully tapered masts . . . and, in place of the spars and rigging, the curious play of the working-beam and pistons, and the slow turning and splashing of the huge and naked paddle-wheels . . . The dense clouds of smoke, as they rose wave upon wave, added still more to the wonderment . . “.

In 1817, steam propulsion spread to when a consortium in Sackets Harbor funded the construction of the first US Great Lakes steamboat, the .  By the late 1820s had its first steamboat, the Seneca Chief.  It was built for and operated by the Rumney brothers, merchants.

Launched in May 1828, the Chief’s first official trip was part of the Independence Day celebrations (the exact date is uncertain, as different sources mention different dates).  The Gazette reported,

“We are indebted to a friend for the following account of an excursion made on Saturday last, from Geneva to the head of the Seneca Lake, on board the Seneca Chief, by a party of Ladies and Gentlemen, which . . . amounted to one hundred and thirty persons. The day was uncommonly fine, the party in excellent spirits . . . The Boat left the Harbor at Geneva precisely at 8 o'clock in the morning . . . The country on each bank of the Lake excited universal admiration among the passengers . . . between four and five thousand persons assembled at [the head of the lake]  . . . to greet the Steam Boat on its first trip . . . After stopping here about two hours, the Boat set out on its return to Geneva, where she arrived at eight o'clock, having been a little more than five hours going, and rather less in returning.  Part of the way down her speed was equal to ten miles an hour, without raising the pressure to near the capacity of her excellent Engine . . .  when fully completed and the machinery worn smooth, the Boat will be enabled to make her trips . . . and return in eight hours, including short stoppages at several points.  A Band of amateur Musicians afforded a zest to the pleasures of the day.“

The writer was delighted that the Chief had created “ next door neighbors” at the other end of , “that hitherto remote region.” 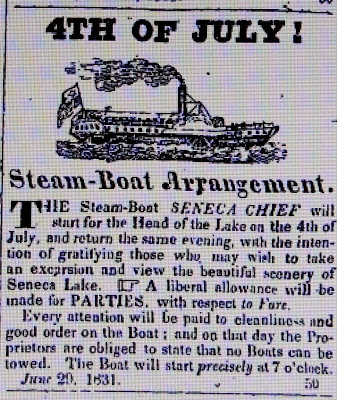 The Seneca Chief, however,  was not just a pleasure boat, though.

“Immediately after the Fourth the Steam Boat will commence her regular trips to the head of the Lake daily, Sundays excepted, leaving Geneva at 7 in the morning and returning at 7 in the evening—carrying the mail in connexion [sic] with a daily line of Stages to Washington city.  She will touch at and at Bailey town
(near Ovid) to receive and deliver passengers and take freight boats in tow.”

The Courier mentioned in April 1831 that the Chief had arrived with passengers and ten boats in tow, which included such cargo as flour, pork, whisky, and lumber.  The Gazette predicted that “ will become a great focus for travel by Steam Boats, Canal Boats and Stages.”

The Rumneys did not rest on their laurels.  Less than a year after its launch, they overhauled the Chief:

“The Engine has been raised so as to add three feet to her wheels, giving them a diameter of 15 feet.  An elegant Cabin is erected upon the deck . . . a mast has been added on which to spread a sail in a fair wind; and, taken altogether, she is much improved in speed, accommodations and appearance.”

In January 1832, a storm sank the Seneca Chief at the wharf.  When the boat was raised, the damage was minor.  Still, the Rumneys took the opportunity to make more changes.  That spring, the Courier announced that

“The Steam-Boat Seneca Chief has now commenced running up and down Seneca Lake, four times each week . . . The boat is much improved in appearance and speed . . . and every attention will be paid to the comfort of passengers, as well as the strictest attention to neatness and order.  No ardent spirits will be kept on board. ."

In 1833, the Rumneys sold the Seneca Chief to John R. Johnston and Richard Stevens, who in turn bought the steam navigation rights to .  Johnston and Stevens rebuilt the Chief, lengthening it by 35 feet and renaming it the .  They may have installed a bigger engine, as an 1879 memoir stated “When John R. Johnston operated on the water, a new life was put into the steam marine of , and things moved lively from that time to this.”   Two years after purchasing the Chief,  Johnston and Stevens built the Richard Stevens, the second steam boat on .

By 1847 or 1848 (sources differ) the Seneca Chief/Geneva had come to the end of its useful life.  Someone had a brilliant idea – they could blow up the boat as part of the July 4th celebrations.  The Gazette described the event in 1889:

“It was to be the grand coup of the celebration. Loaded with a supply of powder she was placed far out in the lake, and a wire connected with an electric battery run to her. A grand spectacle was looked for by the assembled multitude on the shore. It is estimated that 10,000 people were present lining the shore at every convenient point. The electric key was touched time and again but there was no thundering response. Failing in this a party armed with a fuse was despatched [sic] in a small boat and another attempt was made to blow her up by thus igniting the powder.  This even failed to work, but the boat took fire and the disappointment of the spectators was considerably lessened by seeing the relict of the grand old steamer shoot fiery tongues towards heaven, illuminating the whole harbor and the adjacent shores . . . The powder had become wet in some manner and its explosive qualities thus destroyed.  As it was the sight was a memorable one.”
Posted by Unknown at 4:37 PM