I don’t know about you, but I love to grocery shop.  I love seeing the new products and choices and the incredible array of fresh fruits, vegetables, breads, fish and meats.  I can go to the store for a jar of peanut butter and come home an hour later with cashew butter, peanut butter, almond butter, cherry jelly, 6 cans of beans in 6 different varieties, 3 birthday cards, a set of dishes, 10 varieties of tea, a chocolate sea salt toffee candy bar and a jug of cat litter.  I will have spent way over my allotted food budget in a short period of time and loved every minute of it.

I remember going to the grocery store with my parents in the mid to late 1950s, when I was still quite young, and thinking that everyone drove to a shopping center.  My family went to where there were 2 grocery stores in the plaza; a Wegman’s and a Star Market.  One store was on the north end of the plaza and the other on the west side.  Sometimes we shopped at Wegman’s and sometimes we shopped at Star and on really good days we shopped for bargains at both!  They both had coin operated rides in front of the stores that were usually horses and if I was really well behaved my dad might put a nickel in and let me ride the horse. 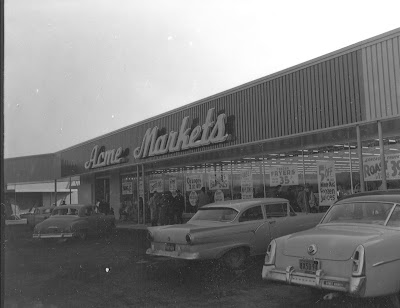 In my memory of those days we bought things like flour, eggs, butter, chuck roast, chicken, milk, sugar, toilet paper and whatever fresh fruit or vegetables were in season.  My dad would often pick out a couple of chuck roasts and ask the butcher to grind them for him and we would have hamburger or meatloaf.  We seldom bought already prepared foods as my mother was a good “from scratch” cook.  When we finished checking out we got S&H green stamps with our receipt or a different type of stamp that was yellow.  I was usually given the task of pasting the stamps in little booklets and when we saved enough books of stamps we went to the Green Stamp store and exchanged them for “gifts”, items like toasters, charcoal grills, lawn furniture etc.  I loved this adventure in shopping too, though I never convinced my mother to get me the stuffed animal that was only ¾ of a book of stamps.

I grew up in a rural part of the Town of and it never occurred to me that in cities like there were a lot different grocery stores that you could walk to!  I pulled out the Geneva City Directory of 1957 to compare the stores in to the ones I remembered in and found out that in 1957 there were 38 retail grocery and meat shops listed!!  I knew that corner grocers were popular and necessary in that time period but to have 38 stores for 19,414 people meant one store for every 500 + people.  These stores were spread all over the City on Castle, Genesee, Exchange, Seneca, Middle, North, High, Lyceum, John, Hamilton, Oak, Wadsworth, William, Angelo, and Andes streets to name some of them. 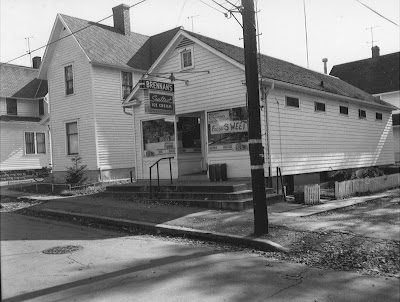 The stores had names like A&P, Acme Market Basket (there were 4 of those listed), Best Market, Brennan’s, Commesso Foods, The Corner Store, Crest Super Market, the Economy Store, Madia’s, Loblaw’s,  Hamilton Food Market, Sunny Fruit Store and Thomas’ Red & White.  That is only 13 out of 38!  I am not sure what types of goods they stocked or how they would have compared to our two Greece Groceries, but I will bet they were plentifully supplied with a variety of good things.

One grocery in particular, Market Basket, was a big success story.  Started in 1901 by Harry E. Hovey with one small store in Warsaw, NY he opened a store in Geneva in 1914 and eventually his business grew into 300 small groceries in central and western New York and by 1951 it had developed into 141 large self-serve supermarkets with a fleet of 35 trucks, their own carpentry shop, and its own “mimeograph” department. 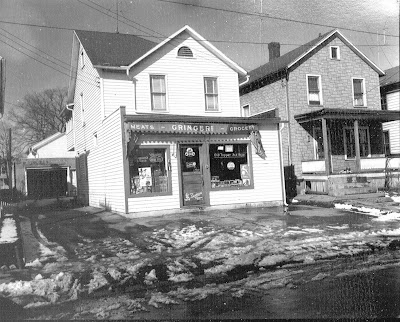 Today has three supermarkets Wegmans, Tops, and Madia’s.  Wal-mart has a large grocery section in their store on as does BJ’s across the street.  Red Jacket Orchards also has a store across the street from Wal-Mart that sells fresh fruit from their orchards and other locally produced food products.  Wegman’s, Tops, Wal-mart , and Red Jacket are all located on Hamilton St. leaving Madia’s on the corner of Oak and Castle Streets as the lone representative of the once flourishing neighborhood food stores. 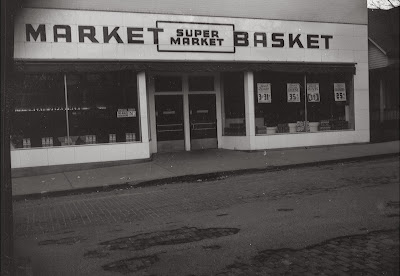 The way we purchase food has changed from what it was in the 1950s. The size of grocery stores has drastically increased while the number food stores in our cities have decreased, yet the variety of food items for sale would astound our parents and grandparents.  I wonder what your children will remember in 50 years about their trips to the grocery store with you…..
Posted by Unknown at 4:16 PM