We walk by buildings every day without questioning their appearance, whether or not we know architectural styles. Sometimes we stop seeing buildings altogether. The Armory comes to mind because I recently spent several months on a committee to plan a Veterans Day event there. Anyone over the age of three years old will look at the Armory and say/ think, “Castle!” Why?

Built in 1892, the Armory initially looked like many other public buildings of its time: red brick, rough stone foundation, and lots of arched doorways and windows. The tower was a little unusual but not unheard of. 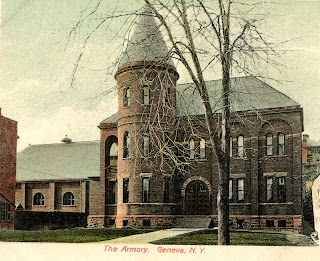 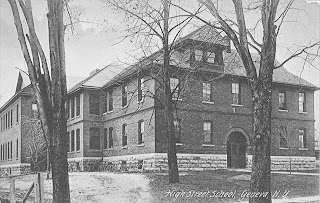 armories were all designed the same. There was an administration building in front, and an attached drill shed behind it. (The drill hall looked like, but should never be called, a gymnasium.) The armory drill shed is visible in back and to the left.

’s National Guard unit, the 34th Separate Company (later Company B), quickly outgrew its building. The state legislature authorized an expansion which was completed in 1906.

The castle or fortress appearance, adopted earlier in other towns and cities, was no accident. The 1890s and 1900s were times of immigration, labor unrest, and concern about Socialists and Communists trying to organize new immigrants and workers. State militias were activated to protect citizens however the government saw fit, by preventing violence or breaking strikes. Armories were built in the center of towns and cities to reassure citizens, and remind agitators, that the militia was on the job.

The armory, like others, was built to function defensively if necessary. Look at the south (left-hand) tower. The base rises in toward the building while the top windows of the tower jut out. If attackers attempted to scale the foundation, defenders in the tower had a clean shot at them. Likewise, the casellations (pattern on top of the tower) and narrow windows provided protection for soldiers shooting down at the street. Larger armories had iron gates that locked in front of the main doors for extra protection against mobs.

Sometime after 1906 the top of the north tower was altered to match the south tower, and a porch was built over the main entrance. The last addition to the building was the garage to the north, sometime after World War II.

Being in town and city centers, older armories were often built on small lots with little room for expansion. Changes in military vehicles and equipment required more storage space; by the 1960s, many urban armories were abandoned for new buildings on the outskirts of town. Some found new uses, many were demolished. is fortunate to still have this building on .
Posted by Unknown at 2:14 PM