General Tom Thumb was the stage name of Charles Sherwood Stratton (1838 - 1883), a little person who became famous under the showman P. T. Barnum.

Charles Stratton was a son of a carpenter.  At birth he weighed 9 pounds, 8 ounces.  During his first six months Charles developed normally reaching 25 inches tall and weighing 15 pounds. Then he stopped growing.  His parents were naturally concerned; their doctor said Charles was unlikely to reach usual adult height.
P. T. Barnum (a distant relative,) taught Charles to sing, dance, mime, and imitate famous people.   At the age of 5 Charles made his first American tour with routines that included impersonating such varied characters as Cupid and Napoleon Bonaparte.  He also sang, danced, and delivered comical banter with a straight man.  People loved him, and the tour expanded.

In 1847, the year the Sills went to see him, Charles Stratton started to grow again, but very slowly. By 1862, he had reached 2 feet 11 inches.  The next year, he married another little person, Lavinia Warren.  The wedding was front-page news.  The couple was received by President Lincoln at the White House and toured Europe and together.  The Strattons became wealthy.

I found the ad for Tom Thumb’s 1847 visit in the Geneva Gazette: 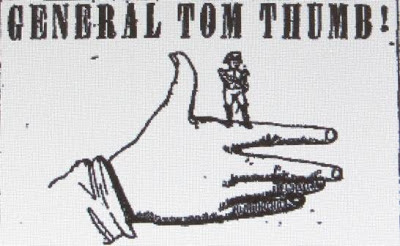 THIS distinguished man in miniature, weighing only 15 pounds, 15 years of age [he was actually about 9], and but 27 inches high, who has been received with the highest marks of Royal favor by all the principal crowned heads of Europe, and who has performed before five millions of persons during the last four years, will hold six public levees at the GENEVA HOTEL, on Monday and Tuesday, Aug 9th  and 10th    [The note in the Sill book is dated the 13th –  did General Thumb stay over, or did the keeper of the accounts just not write down the expense until later?]

The little General will appear in all his performances, including Songs, Dances, Grecian Statues, etc., and also represent Napoleon Bonaparte, Frederick the Great, etc.

He will also appear in his beautiful Scotch costume, and his elegant Court Dress, worn before Her Majesty, Queen Victoria, the King and Queen of the French, Nicholas, Emperor of Russia, and all the principal crowned heads and nobility of .

It is now five years since the little General appeared in , and his weight is precisely what it was at that time, viz:

He is perfectly symmetrical in all his proportions, intelligent and graceful beyond belief, and SMALLER THAN ANY INFANT THAT EVER WALKED ALONE.

The MAGNlFICENT PRESENTS, JEWELS, &c., received from the Kings, Queens, and nobility of will be exhibited.

His beautiful MINIATURE EQUIPAGE, presented by Queen Victoria, consisting of pigmy Ponies and Chariot, attended by Elfin Coachman and Footman, in Livery, will promenade the streets each day, and be seen in front of the House at 12 and 5 ½   o'clock.

Notice to the Public.

This is positively the LAST TIME Gen. Tom Thumb will ever be seen in Geneva, as he retires forever from public life as soon as he has paid a brief visit to the principal cities in the Union.  . . .

In 1847, Mr. and Mrs. William Sill had five children ranging in age from four to fifteen.  Based on the admission prices, I’m guessing that Mr. or Mrs. Sill took three of their younger kids to the performance or one child over 10 and another child under 10.

This however was not the last time that Tom Thumb visited .  On June 13, 1856, for example, the Gazette said he would soon appear at Linden Hall.  Such was the public interest in Tom Thumb that the paper reported on his doings even when he wasn’t coming here.