By Anne Dealy, Director of Education and Public Information

This year in we got our first real snow of the season just before Christmas. Some were surely happy to have a white Christmas. Others were reminded of why they want to move south. Now begins the season of complaints; complaints about snow and cold, slippery roads, chilly drafts and our bulky clothes. As one who spends six months of the year trying to get my hands and feet warm, I long for the heat of summer time. Despite my discomfort, I am eternally grateful for my life in a time of central heating. I am quite certain I would never have been warm in the years before its advent, for a comfortable house in winter was a rare thing in much of the prior to the late 19th century. According to the English traveler Margaret Hunter Hall, who visited Cayuga, NY in 1827, American houses were built “expressly for summer, without the slightest reference to the six months’ winter that they suffer.” (G, p.183). Those of us who spend our days in old houses like and the Prouty-Chew House know how uncomfortable they can be in winter. Even today, their large rooms, high ceilings, and many windows make them chilly and drafty.

According to Priscilla Brewer’s book From Fireplace to Cookstove: Technology and the Domestic Ideal, most early Americans followed the English example, heating their homes with fireplaces. The biggest drawback to fireplaces, then as now, is that most of the fire’s heat escapes through the chimney. Sitting by the fire meant a comfortable front and a cold backside. In northern European countries like and , wood burning stoves were commonly used beginning in the 1600s. Stoves gave greater heat for less wood, an important consideration in , where wood was scarce and costly by this time. For several reasons, including their milder climate, the English did not embrace this new technology, preferring “the cheerful flicker…of a fire” (Brewer, p. 24). The frontier colonists in were too busy clearing land and establishing settlements, to concern themselves much with comfort and convenience. They followed the practice of their native land, building houses with fireplaces intended to warm the person, not the room; the idea being that if you got cold you went over and warmed up by the fire. As a result, houses in were rarely warm in winter, and families confined themselves to one or two rooms for the long cold winters.

Brewer indicates that in 1800 the typical American family burned 18-20 cords of firewood a year to heat their home. Inhabiting a country rich in forested land, Americans used up wood at rates that shocked Europeans. In newly settled areas, there was so much wood and so few people to clear it that wasteful practices became the norm. Wanting to clear land quickly, settlers often burned forests, ridding themselves of the trees and producing potash, a valuable compound used as a fertilizer and in the manufacture of glass. ’s newspapers of the early 1800s are full of offers to pay scarce cash for wood ashes. Highly profitable, potash production was a major driver of deforestation on the frontier in the late 18th and early 19th century. With wood plentiful, there was little incentive to economize or improve heating efficiency. 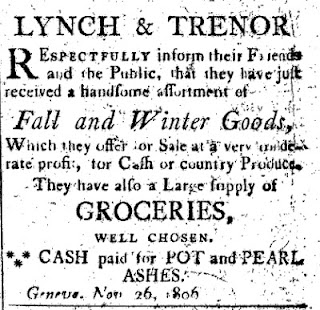 Unfortunately, these practices quickly led from abundance to scarcity, with settled areas of the colonies experiencing fuel shortages as early as the 1680s. By the mid-1700s the fuel crisis was acute in some areas, and the high price of wood led some Americans, including Benjamin Franklin, to consider ways to heat homes more efficiently. In order to accommodate the English desire for an open hearth and visible fire, Franklin and other focused on improving the efficiency of the fireplace. His 1741 solution was the Franklin stove. This “stove” was really a cross between a stove and a fireplace. It was essentially a metal box, open on one side, which fit into a fireplace and increased the radiation of the fire’s heat into a room. You can see a late 19th-century colonial revival variation on this design in the rear parlor at , where we know the Swans had a stove in the 1860s. 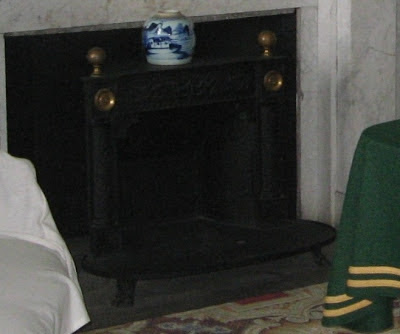 The prejudice against enclosed stoves was slow to die, with critics arguing that warm, stuffy air promoted sickness and that stoves were unrefined. Of greater consideration for most families was the high cost of purchasing a stove, which was only within the reach of the wealthy in the 18th century. As a result, stoves first became widely used, not in the home, but in public buildings such as churches, shops, and schools.

After , the fuel crisis increased interest in stoves, while improvements in iron production and transportation lowered stove costs and made them more available. Locally, stoves were available by the 1820s. For the Finger Lakes region, the opening of the system beginning in 1817 made stove importation realistic. Prior to this improvement, the heavy cast iron stoves either had to be produced locally or brought in by wagon from the east, making them prohibitively expensive. In 1818 a Seneca Falls merchant advertised in the Geneva Gazette, ten plate and stoves from the Constantia Iron Works on , which were probably brought in by canal. Beginning quite suddenly in September of 1823, several Geneva stores started advertising stoves, among these Phineas Prouty’s offer of “Box, Oven, Cooking, Parlor, and Franklin STOVES” at his Seneca Street store. This sudden change may have coincided with the opening of the canal to . Most households still did not use stoves extensively, and many houses, including the Prouty-Chew House (built in 1829) and Rose Hill (1839), were constructed with fireplaces in nearly every room.

Because they were heavy and difficult to transport, stoves were often produced locally. In 1837, Burrall & Dwight offered the Geneva Cooking Stove, patented by Burrall (the Thomas Burrall who patented many agricultural tools). According to the advertisement, this stove required “less fuel, and answers more purposes with less labor, than any other Stove in use.” In 1846, an advertisement for the Geneva Foundry Store offered a list of 10 different types of wood and coal stoves in multiple sizes at wholesale and retail prices. Cooking and heating stoves took off in the 1830s and 40s as fuel costs increased and transportation networks improved. In November of 1850 Robert Swan’s mother writes Margaret, “We got two very nice stoves for you & some Sundry useful things are put up with the Stoves.” The stoves were shipped on the Erie Railroad, likely to and then on the and Seneca Lake to . 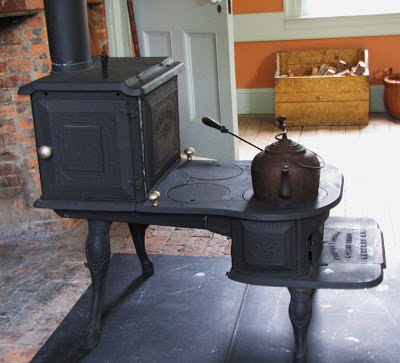 As technology improved, households adopted a variety of heating methods. Some people preferred to use a fireplace in the parlor and put stoves in smaller, less formal spaces. Manufacturers also produced fancy, decorated stoves for the parlor, like the Andes line by ’s Philips and Clark Stove Company. With the adoption of coal as a fuel beginning in the 1830s and the subsequent development of central heating systems, some homeowners installed coal fire grates and furnaces. In 1880s photos of Rose Hill, we can see the radiators present in the house. 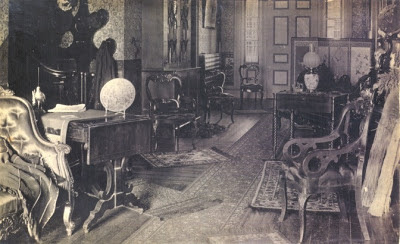 The Prouty family put a wood burning fireplace in their 1858 bedroom addition, but a coal grate in their new dining room in 1870. They also had a furnace as early as 1857 that had to be started up when the cold weather came. You can see the remnants of this system throughout the house today. 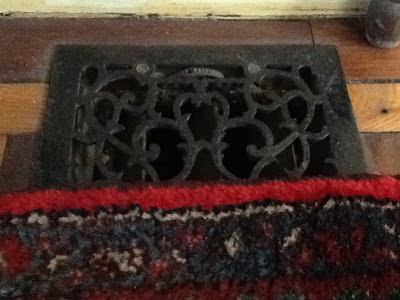 Furnace grate in the Prouty-Chew House.

None of these efforts succeeded in keeping them warm when the weather turned severe:
“And today we're glad to keep our noses in doors, it is so bitterly cold. The children wore blankets pinned over their heads for one hour this morning and cried with the cold. Ally's cup of water by the bedside was frozen and Grandpa has worn his overcoat all day. Tonight the wind howls in shrieks—the snow flies in clouds, and the keen searching cold penetrates even our furnace-heated rooms.” — Prouty, 1861

As evidenced by the abundance of foundries producing boilers, heaters and stoves in at the end of the 19th century, consumer demand for improved heating systems was strong. Improvements in production and the low cost of coal made a comfortable home accessible to more Americans each year, so much so, that today we can barely conceive of the cold endured by our ancestors during the winter months.

For more information on comfort and heat in homes, see:

Priscilla Brewer, From Fireplace to Cookstove: Technology and the Domestic Ideal in . , : Press, 2000.

Backstory with the American History Guys, website and podcast on heating and cooling history: http://backstoryradio.org/climate-control-a-history-of-heating-and-cooling/
Posted by Unknown at 12:57 PM