During the 1800s young ladies from middle and upper class families were educated at female seminaries.  The seminaries were basically privately funded schools that provided students with a secondary education. Since there was a general belief that an overeducated woman would become “unsexed”, female seminaries offered classes that were distinctively feminine and considered much less mentally taxing than courses offered to male students.  Along with the basic academic subjects, the curriculum often included French, music, painting, needle crafts, domestic arts and social graces.  was home to several female seminaries.  One school was Geneva Female Seminary established by Elizabeth Stryker Ricord (1788-1865). 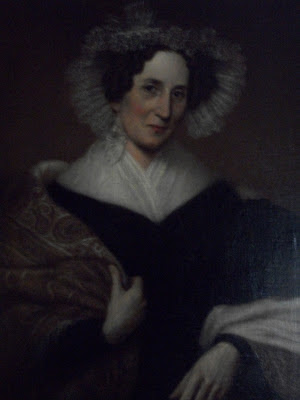 Born in Long Island and raised in , was the oldest child and only daughter of Peter Stryker.  Since was very well educated we can assume she was taught by private tutors.  On December 6, 1810 married Jean Baptiste Ricord-Madianna.  Between 1811 and 1824 the couple had four sons and traveled to the at least twice, where Jean studied botany and natural history.  By 1824 the couple was living in the and eventually settled their family in .  In 1829, however, was separated from her husband and living in . To support herself and her sons, opened the Geneva Female Seminary.

was part of a growing group of women that believed that women should receive an education equal to that of men.    She saw the primary purpose of her seminary as training teachers.  With that in mind she designed a much more rigorous curriculum than what was offered at the majority of female seminaries. Besides sewing very few domestic subjects were offered.  The core subjects were spelling reading, geography, arithmetic, history (ancient and modern), science (astronomy, botany, geology, natural history, geology and chemistry), mental philosophy, moral philosophy, natural philosophy and composition.  For an additional fee classes in Latin, Greek, Italian French, music, drawing and painting were also offered.

Day and boarding students of all ages were accepted.  Students came from the Finger Lakes, , , and . To determine their class level, each student took placement tests. Instead of focusing on memorizing and recitation (the preferred method of instruction) and her follow students encouraged students to ask questions and think for themselves.  The school year was two 22 week terms.

Though the school continued to operate until 1842, poor health forced to resign as principal in 1840.  She, however, was not quite ready for retirement. The same year she resigned from the Geneva Female Seminary, turned her lectures notes on “mental philosophy” or psychology into a textbook, Elements of the Philosophy of Mind, Applied to the Development of Thought and Feeling.   With the book’s publication, became the first woman to write a textbook about psychology for women.  She would publish at least one more book,  Zamba or the Insurrection (a fictionalized poem about a slave insurrection in ). 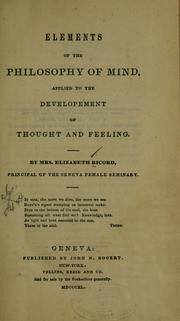 In 1845 moved to .  In addition to writing for articles for magazines and journals, she co-founded the Newark Orphan Asylum and served as its director until her death in 1865.