From Lake to Table (Fish Dinner from Catch to Table) 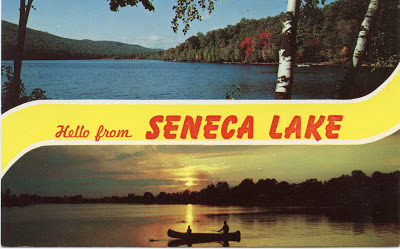 I was very young when I learned not all the food my family ate came from a store.  My maternal grandfather had operated a small farm before I was born and by the time I arrived on the scene he still kept a few chickens around.  I was the type of child who was fascinated by any 4 legged or 2 winged animal and I loved going to visit Grandpa Henry.  I knew eggs came from those chickens not the grocery store.

Later, I learned corn, tomatoes, lettuce, beans and squash were grown in our garden, along with some other vegetables I distinctly did not enjoy.  I even got to visit a barn full of sheep and later pigs.  I discovered that you should not bother the sow (female pig) and piglets unless you were able to outrun the pig and the rest of the children who helped you tease her.

Still, the best part of my fresh food experience involved fish.  My father and his father were hobby fisherman.  They loved spending the day by the water, any body of water, and casting in a line with the hope that some large (or medium size) denizen of the deep would deem their bait worthy of a taste.  If the bobber dipped below the surface the battle was on!  Since they fished exclusively fresh water the hook could hold any number of surprises; largemouth bass, small mouth bass, muskellunge, pike, pickerel, bullhead, trout, perch, black bass, rock bass, sunfish, carp or even eel.  Every strike was an adventure for a 6 year old.

As my family was Roman Catholic and I grew up in the days of no meat Fridays, fresh fish was our alternative.  If there was no fish in the refrigerator we were forced to eat the dreaded creamed canned salmon on potatoes or worse…EGGS!  To this day I seldom eat eggs unless I am out at a restaurant for breakfast.  I became a fish connoisseur early knowing that I favored the fish with fewer bones over the ones with many.  Fish lightly floured and sprinkled with salt and pepper then fried in hot butter was a highly prized luxury for me.  Some of my favorite fish were smelt.  Small finger length fish that could quickly cleaned and prepared.

With all fish, once the catch is on the hook, in a net or in the boat the next step to a fish dinner is cleaning.  This is where I balked.  I had often watched my dad scale and clean various types of fish, but when he wanted me to help, oh no!  Dad’s explanation was pretty clear.  My mom had cut her finger and if I wanted smelt instead of eggs this Friday I had best sit myself down and toughen up.  Sigh, I wanted smelt so I sat and gulped.  My dad, who often couldn’t figure out how to deal with the 3 women in his house, had an inspired moment using this “food preparation event” to teach me about fish anatomy.  Since you catch smelt in the spring around spawning time it was the perfect time to teach me how to tell a male fish from a female based on their insides.  Before I knew it the cleaning was over, fish were ready for Friday dinner, and I learned something!

So what, you ask, does this story have to do with the or even the Historical Society?  The answer is multi-faceted.  First is called the “Lake Trout Capital of the World” and each year the Lake Trout Derby is held on Memorial Day weekend.  Second, most of the fishing my father and I did years ago was in the , mainly Hemlock and Canadice.  However, from time to time we did manage to go to some of the other like Honeoye, Seneca, Canadaiqua, Otisco, and Conesus.   I loved them all and considerd myself very fortunate to be able to live in this beautiful spot.  Finally, one of the stories concerning Rose Hill involves a muskellunge (often called a “Muskie”), which Robert Swan bought while in and brought home for their cook to prepare.  A letter about the meal states the fish was very large, the cook served the fish boiled and nobody cared for it very much.

Well, of course they didn’t!  Muskellunge is a game fish that can grow upward of 50 inches and weigh 30 or more pounds.  It has some “y” shaped bones that need to be removed before cooking, unless you want to take a very long time to pick over your meal.  The fact that the fish grows so large means you should clean any visible fat off it to enhance the flavor and discard the pollutants which collect in the fat.  Of course the cook probably looked at the fish and thought “what will I do with this thing?”  Still, I can’t imagine serving it boiled.  I checked the internet for Muskie recipes and found recommendations for pan frying, baking, grilling and poaching, but not boiling.
I had the opportunity to cook a “Muskie” once and lightly floured it then cooked it with a sprinkle of salt and pepper in hot butter.  It was “WONDERFUL” even though I had to watch extremely carefully for bones.

I think it really is sad that so many children today don’t understand where our food originates.  I doubt many of them have been chased by pigs, ridden a tractor with their father to plow the garden or had the chance to learn about the internal organs of fish while sitting by the sink cleaning smelt.  The Swan children of Rose Hill knew who produced their food and how it arrived on the table.  Many times when I give a tour at Rose Hill and mention the muskellunge I hear, “What is that?”  Thanks to my childhood, I can tell our visitors.