You hear a lot nowadays about landfills, recycling, garbage and waste.  There are advertisements on the radio for recycling, letters to the editors about landfills, and exhibits, displays, and housing projects built around recycling.  Many people don’t care for the idea of garbage, their own or others, near their home.  There are concerns about smells, ground water contaminants, air pollution, and excessive traffic caused by garbage trucks.  There is no doubt that our disposable society generates a tremendous amount of waste and people seldom agree on how to dispose of garbage.

In the more recent past, 50 or more years ago, we practiced a lot of recycling without even thinking about it.  The milk man delivered milk, eggs, butter and cream.  The milk and cream came in refillable glass bottles.  What soda pop there was came in returnable bottles that you paid deposit on.  If something broke it was repaired.  Items purchased at the store did not come with so many layers of tamper proof packaging.  When clothes wore out they had a new “life” as cleaning rags.  If you outgrew your clothes or toys there were siblings, cousins or neighbors to inherit your hand-me-downs. I even knew a man who once went so far as mend a three dollar toilet brush.  The generation that survived the Great Depression often went to great extremes to recycle or reuse various objects.  So historically, how did we as individuals and as a city deal with waste, recycling and landfills? 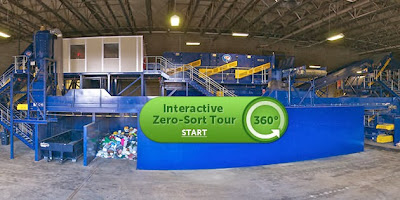 If you go back hundreds of years, people had “middens” or garbage piles outside individual dwellings.  Some may have been by the back door of a dwelling or someplace at the back of the garden at least that is where archaeologists often find remains of items people discarded. Remember, folks were not throwing out as much as we do now.  Animal bones, broken crockery and odd bits were usually discarded there.  People burned what was burnable and used what was useable and if you were wealthy enough to just throw away whatever struck your fancy, there was almost always someone needy enough to “recycle” items from your rubbish pile.

Even privies or outhouses ended up being the recipient of broken household goods.  You might be thinking “Eew! Gross!”, but archaeologists find the sites of middens, privies or anywhere people discarded bits and pieces of civilization helpful in recreating the way people lived, worked and played.

Reading the Village of Geneva trustee meeting minutes of the early 1800s is interesting because it shows the Village trustees beginning to officially comment on where and what people could “dump”.  As sometimes happens, different individuals have different notions of how fastidious their surroundings needed to be kept.  Eventually public health dictated that people cease throwing garbage in their back yards and required a public dumping place on the outskirts of the residential area.

The City of had a “dump” as did most municipalities.  In checking the Geneva Bureau of Public Works Reports for the year 1930 I found care of the dump listed under the Highway Department and found they had expended $1,388.19 on “Care of Dump”. Compared to what gets spent on landfills and trash pick-up today that is probably very inexpensive, but I suspect that in 1930 part of “Care of Dump” entailed hiring a care-taker to make sure that “bears”, stray dogs or kids didn’t overrun the place after closing. Today many municipalities have their landfills operated by outside contractors or the dump is owned and operated by companies like Casella in or Seneca Meadows in .  Garbage is now big business (it appears the Ontario County Landfill had a budget of around $600,000 as of 2012).

So where were the dumps in ?  I had to do quite a bit of looking to find out.  Even after hours of reading Bureau of Public Works Reports and newspapers the best I can do is point to a general area in which the dump may have been.  For example, there is a mention in the 1898 BPW Report that purchased a stone crushing machine and placed it near the dump.  Then in the September 7, 1957 issue of the Geneva Daily Times there is an article about the dump being overrun by rats, but it doesn’t even mention the location.  It didn’t need to, everyone in town knew.  The Geneva Daily Times states that the Board of Public Works quit burning the rubbish and the rat infestation increased.  Apparently rats dislike charred food, but the neighbors downwind from the dump disliked the smell of burning garbage and burning ceased.  I am not certain the neighbors won much in this case.

A earlier article from the January 11, 1957 Geneva Times states the location of the landfill was at the north end of Seneca Lake and east of Pre-Emption Street.  There was much discussion about where the City Common Council could find the amount of land necessary for a sanitary landfill.  The figures cited in the paper were 1 acre of land for every 10,000 people each year.  The population of at that time would require 2 acres of land per year so for a 20 year period 40 acres of vacant, unproductive land would be required, an amount that would be very difficult to acquire in densely populated city.  The discussion may have been more prolonged if the need to close the dump so the arterial could be built hadn’t arisen.  But, then the question of where to put the new dump arose.

By April 1959 both the City of and the Town of had new locations for their dumps.  The city contracted with Dominick Tantalo and Edward Kenny, two contractors from Waterloo to operate a dump about a mile north of the Ecko Plant, a division of Geneva Forge, in the town of Geneva.  Meanwhile, after a disagreement arose between the city and the town of use of the existing landfill, the town hired Sam Maio to run a land fill for them consisting of a dump, which was located on near the railroad tracks and between and   Mr. Maio with received about $100 a month for care of this landfill.

By 1978 the was operational and more municipalities in the county were arranging to use that landfill since the New York State Department of Environmental Conservation passed new and stricter regulations for running landfills that were also more expensive for small towns and villages to meet.  Some towns developed “transfer stations” where you brought your garbage to the town station and paid a fee to leave it there.  Some cities contracted for garbage pick-up.  There doesn’t seem to be a solution to refuse handling that everyone agrees on.  Garbage remains a difficult subject in more ways than one.

Note: This whole article came about because someone asked me where the old dump was; unfortunately I still can’t say precisely where it was placed.