(Warning – I’m not a military historian.  What follows is my small attempt to commemorate the 150th Anniversary of Gettysburg and the role played by the 126th.  For more information, I recommend Written in Blood: History of the 126th New York Infantry in the Civil War by Wayne Mahood and The Redemption of the Harper’s Ferry Cowards: The Story of the 11th and 126th New York State Volunteers Regiments at Gettysburg by RL Murray.)

Every family has that place where you visit on a regular basis.  It’s a place where even though you know the lay of the land, you may still “discover” something new.  For my family one of those places is .

In 1989 we made our first we made our first visit and over the years we’ve been back too many times to count.  While on our first visit, my brother Matt and I actually thought that the body of Jenny Wade (the only civilian killed during the battle) was in the basement of the Jenny Wade House.  As our parents toured the house, Matt and I stood at the basement’s entrance warning people not to go down.  (Twenty-three years later I finally overcame my fear and re-visited the house.  And yes, the “body” is still there).  On another visit Matt and Dad roamed Little Round Top looking for a marker for the 20th while Mom and I suggested that perhaps we all should stay on the nice trail created by the National Park Service. Eventually they stumbled upon the statue of Joshua Chamberlain.  In 2008 I thoroughly enjoyed the tour of the Shriver House as it tells a side of the Civil War that often gets forgotten – the effects of a battle and its aftermath on civilians.

Last summer our “adventure” was searching for the 126th monument.  My parents had read about the regiment so they wanted to know where the monument was located. Whether we will admit it or not, my family has a ritual at .  On our first night we simply drive around the battlefield.    After a good thirty minutes or so, we found the monument in Ziegler’s Grove on .  If you are familiar with , the monument is near the old .  At the time I knew the 126th had some connection to . 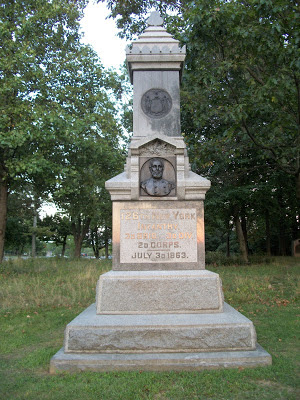 On June 15, 1862 the 126th New York Infantry Regiment was organized in by Eliakim Sherrill (who would become the regiment’s commanding officer).  The regiment consisted of men from , Seneca and .  Company E was made up of men from and Rushville.    During their first engagement, the regiment surrendered to the Confederates at Harper’s Ferry earning them the nickname “Harper’s Ferry Cowards.”    The regiment was quickly paroled and spent several months at in waiting to be exchanged.  It goes without saying that the men of the 126th had something to prove and was their chance.

In late June 1863, the 126th was on garrison duty around , when they were transferred to the Army of the .  The regiment arrived in on the early morning of July 2 (the second day of the battle).  For two days, the regiment played an important role in defending the Union lines, particularly during Pickett’s Charge.  Of the approximately 455 men from the 126th at , 40 were killed (including Sherrill), 181 were wounded and 10 went missing.  Only three other Union regiments had more men killed, wounded or captured – 24th (272), 111th (235) and 151st (223).  Three members of the regiments (George H Dore, Morris Brown, Jr. and Johnny Wall) would receive Medals of Honor for capturing Confederate flags.

For the next two years, the 126th fought in battles in , including the Wilderness, Spotsylvania, Cold Harbor and .  To honor the men of the 126th, the State of dedicated a monument at on October 3, 1888. 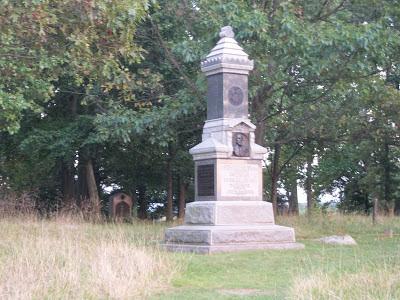