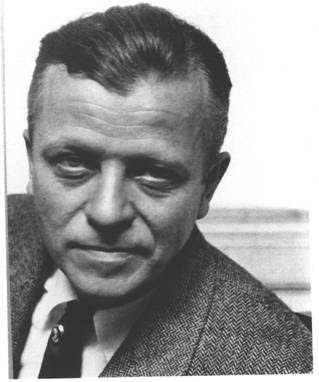 Dove was born in Canandaigua, New York, but his family moved to when he was two.  He grew up on , then .  His neighbor Newton Weatherly was a naturalist and landscape painter who introduced Arthur to painting.  Dove’s father was a successful contractor and brick manufacturer who built , several College buildings, and the rear part of .  He expected his son to become wealthy in some conventional profession.

Dove attended Hobart College for two years, then studied law and art at Cornell, graduating in 1903.  He became a well-known commercial illustrator in New York City, working for such magazines as Harper’s and The Saturday Evening Post.  Dove's parents were dubious about this, wanting him to become an attorney, but they accepted his choice when he showed that he could support himself through illustration.  They were upset when he left full-time commercial art for fine art, though his brother Paul tells us they continued to help him financially (oral history in the GHS archives.)

In 1907, Dove and his first wife (a South Main neighbor) moved to .  He saw new painting styles, and exhibited at the Salon in 1908 and 1909  (the Salon’s exhibition was the great art event of the Western world).   When Dove returned to , he found commercial illustration increasingly unsatisfying.  “It’s like being a factory,” he said.  He left the city for , then .  He continued to do a little illustration, plus jobs like egg farming and lobstering, and managed to scrape out a living with assistance from his family and a patron – Duncan Phillips - who believed in his art.  Money was always a problem.

In 1909, Dove met Alfred Stieglitz, a photographer and gallery owner who promoted modern art in .  With Stieglitz’s encouragement, Dove produced the first purely abstract American paintings.  His paintings were based on natural forms, but he explained them as “extractions” of the essential forms of a scene.  Stieglitz gave Dove his first one-man show in 1912.  It was the first public exhibition of abstract art by an American.  From 1912 to 1946 Dove showed his work annually at Stieglitz’s galleries. 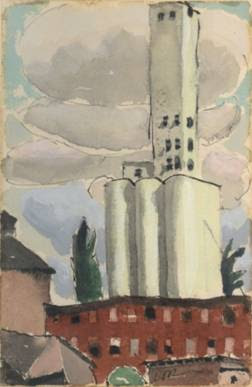 Dove and his second wife “Reds” (also an artist) lived on Long Island from 1924 until 1933, when he came to to settle his mother’s estate.  While here, they lived in family-owned farm houses on , and then on the top floor of the Dove Block, built by Arthur’s father.  (The Dove Block still stands on the corner of Castle and Exchange Streets.)  Dove disliked the family home on , and would not live there.  Dove Block had been an auditorium, the National Guard drill hall, and a skating rink.  Dove set up “rooms” around the edges of the big space – kitchen, bedroom, and so on, without walls – and roller skated in the open center.  Arthur and Reds missed , and moved back there into a tiny house in 1938.  Soon afterward, Dove developed heart disease and kidney trouble.  He lived quietly, devoting himself to painting, until he died in 1946.

Dove talks about his work

“. . . One day I made a drawing of a hillside. The wind was blowing.  I chose three forms from the planes of the sides of the trees, and three colors, and black and white. From these was made a rhythmic painting which expressed the spirit of the whole thing."

"I would like to make something that is real in itself that does not remind anyone of any other things, and that does not have to be explained . . . "

“I am trying to get oil paint beautiful in itself without any further wish.”

“Feeling that the ‘first flash’ of an idea gives its most vivid sensation, I am . . . trying to put down the spirit of the idea as it comes out.  . . . It is the form that the idea takes in the imagination rather than the form as it exists outside.”

Critics and artists admired Dove’s work, but few others understood his abstractions - or bought his paintings.  One who did was Margaret Hutchins, granddaughter of Robert and Margaret Swan of Rose Hill.  Margaret, like her mother Agnes, loved to paint.  In Gentle Enthusiasts, Warren Hunting Smith tells us that Margaret sometimes went to see Dove’s paintings on exhibit when she was in .   During one trip she bough a bought a little painting of by Dove and her mother’s response to the purchase”I’ve always said that a fool and her money are soon parted.”  Agnes may have changed her mind about Dove, though, because Margaret once told Smith that the had no Doves – much to her mother’s distress.   Today, MoMA’s  website lists five Doves.  The largest collection of Dove’s works is in the Phillips Collection in .  GHS owns eleven of his illustrations, a watercolor, and a tempera painting.Arthur Garfield Dove (1880 – 1946) was a pioneer in American abstract painting. 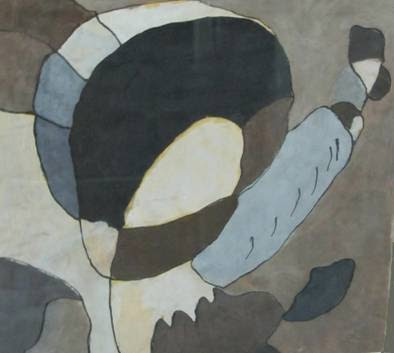