Of course, if you lived in 19th century you used a horse to get around.  Horses were everywhere and if you didn’t own your own you could rent one from a livery stable like Kirkwood Livery and Boarding Stables. The 1894 Geneva City Directory lists 9 blacksmiths and horseshoers (farriers), 10 draymen (men for hire to move heavy loads with horse and wagon), 4 harness makers, 2 hay and grain wholesalers, 3 dealers in bailed hay, 2 public hitching sheds, 3 veterinary surgeons, 3 wagon and carriage dealers, and 8 wagon and carriage makers as well as Henry King, proprietor of the Kirkwood Livery.  The 1895-96 City Directory also lists 4 livery and omnibus stables and other livery and boarding stables in the general directory listings.  I am sure there were just as many horse related businesses in Geneva in the decades prior to the 1890s, but the directories from that time period don’t have separate business listings making it difficult to verify the number of businesses connected with equines. 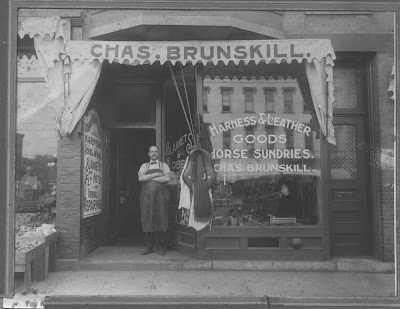 Imagine yourself standing at the corner of and about 1890.  Picture a hot summer day and horses going up and down the street pulling carriages and wagons or carrying riders all the while stirring up small clouds of dust.  Some of the dust settles on your clothes and hair.  The smell of horses and manure wafts on the air, a smell you are familiar with and seldom notice because it is a regular part of life. The harnesses clink and jingle as the teams walk down the street and periodically a neigh or nicker sounds in the air as these magnificent animals “talk” to each other or to their drivers/owners. This sounds pretty, peaceful and romantic doesn’t it?

However, now picture yourself trying to cross the street in wet weather when the surface is coated with a slippery, sticky mixture of mud and manure.  If you are a woman, imagine wearing a longer skirt and trying not to kick this noxious mix up the back of your clothes.  If you are a man, think of your fine leather boots getting covered with this sticky smelly concoction.  Not quite so romantic is it?

Oh, and (in your imagination) what is that you hear? People yelling “get out of the street”!  A big team of farm horses has been frightened and they plunge up and down, trying to escape their driver.  They are loose!  They pound down the street as runaways, not knowing where they want to be except away from the thing that scared them.  This is no longer a peaceful scene.

The Geneva Charter and Ordinances of 1891 addressed some of the negatives that accompanied our equine partnerships of the 19th century with at least 13 entries listed in the charter or ordinances regarding restrictions on tying, confinement, damages, grazing, breeding and the operation of hacks, carriages and/or carts.  However, the heyday of the horse was coming to a close sooner than anyone would realize.

By 1908, only 17 years later, Chapter XV of the City Ordinances was devoted entirely to the automobile! An article in the Geneva Daily Times of May 4, 1940 mentioned that 50 years ago, 1890, ’s first automobile owner, D. J. VanAuken, drove his car on a “trial spin” down .  The newspaper mentioned the car was purchased in and shipped to via the .  It goes on to say that automobiles were becoming quite common in and that “horsemen here and elsewhere predict that the finer breeds of horses will be done away with entirely by the introduction of the automobile, and say that the market is already materially affected.”

Not only does the auto get a full chapter in the 1908 Charter and Ordinances, but horses are no longer specifically listed in the Index to the Ordinances, they are simply implied under the heading “animals” with ordinances regarding driving on sidewalks, tying them up or feeding them in the street.  Automobiles, on the other hand, are listed 9 times in the index and Dogs get 40 mentions!!!  Looks like “man’s best friend” needed a lot of regulation in 1908.

So where does our helpful friend, the horse, end up?  We all know how this story
ends, but it didn’t happen overnight.  In 1922 the Geneva Daily Times printed an article on horse sales in the August 24th edition stating the Horse Association of America declared horse sales to be up during the first 5 months of 1922 compared with the first 5 months of 1921.  The Association claimed there were 27 million horses and mules in the United States in 1922 and many horse buyers reinstating horses into some lines of work were have problems finding the right type of horse.  The article implied horse breeders should have an upswing in their business.

I always enjoy seeing a horse whether it is under harness, or saddle or just standing in a field soaking up the sun.  Seeing a “working” horse in many parts of the eastern is rare, but in upstate you will often see horses pulling buggies or plowing fields.  Most of the Mennonites and Amish in Yates and Seneca counties use horses for daily transportation and farm work.  It is nice to know that despite the ubiquitous automobile, horses are still used and enjoyed in the .

So let’s make one more visit back to our street corner on our nice day in 1890 and as we are startled by the run-away team of farm horses we see what frightened them…could it be Mr. VanAuken’s “trial spin” in his new automobile? 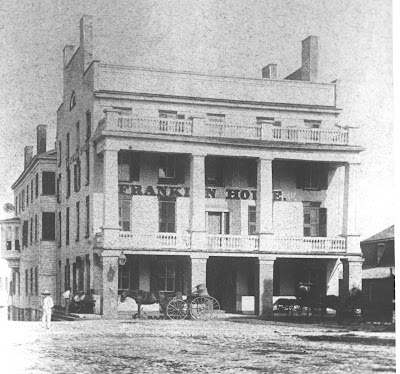